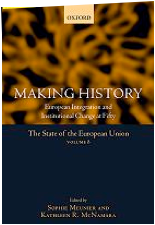 Description “Fifty years ago, the leaders of six European states signed the Treaty of Rome, creating the European Economic Community and launching the process of European integration. From that starting point evolved today's European Union (EU), the most successful example of institutionalized political cooperation in history. The EU now encompasses a much broader array of responsibilities than originally planned, its membership has widened to 25 countries, and its legislation and jurisprudence has come to supersede national law. Contestation has accompanied success, however. ...  The EU today may be at a crossroads--not because of the failed referenda but rather because of the unresolved tensions in European governance not banished with the referenda's defeat. Meunier and McNamara's collection is the first to comprehensively examine these challenging issues using the tools of historical institutionalism to analyze the past and future political and institutional trajectory of the European Union across a wide variety of policy areas.” (OUP Online)